How many TIME_WAITs you have hanging out (run this like root):

This will cause the TIME_WAIT sockets to terminate after waiting for 15 seconds, if no reply from the destination that this connection can be terminated.

This can be added to the /etc/sysctl.conf: 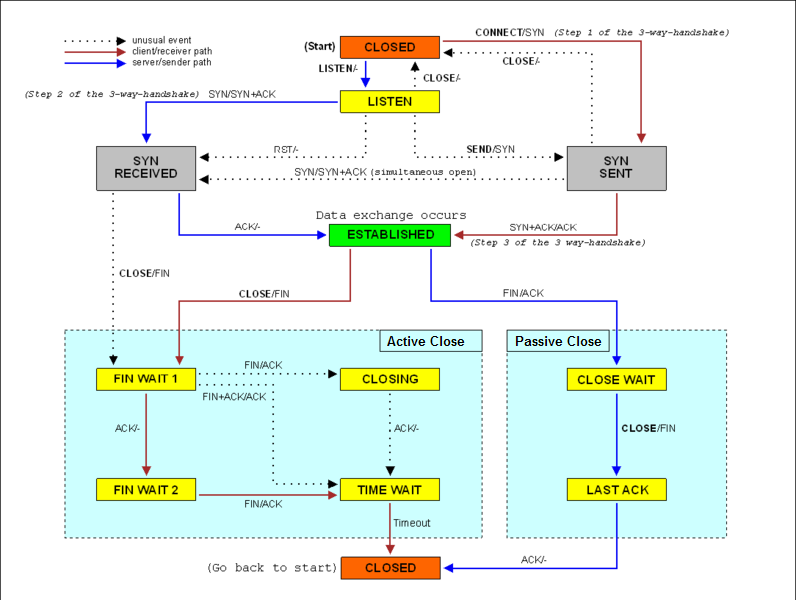 Transmission Control Protocol (TCP) is designed to be a bidirectional, ordered, and reliable data transmission protocol between two end points (programs). In this context, the term reliable means that it will retransmit the packets if it gets lost in the middle. TCP guarantees the reliability by sending back Acknowledgment (ACK) packets back for a single or a range of packets received from the peer.

This goes same for the control signals such as termination request/response. [RFC 793][1] defines the TIME-WAIT state to be as follows:

TIME-WAIT - represents waiting for enough time to pass to be sure the remote TCP received the acknowledgment of its connection termination request.

TCP is a bidirectional communication protocol, so when the connection is established, there is not a difference between the client and the server. Also, either one can call quits, and both peers needs to agree on closing to fully close an established TCP connection.

RFC 793 sets the TIME-OUT to be twice the Maximum Segment Lifetime, or 2MSL. Since MSL, the maximum time a packet can wander around Internet, is set to 2 minutes, 2MSL is 4 minutes. Since there is no ACK to an ACK, the active closer can't do anything but to wait 4 minutes if it adheres to the TCP/IP protocol correctly, just in case the passive sender has not received the ACK to its FIN (theoretically).

In reality, missing packets are probably rare, and very rare if it's all happening within the LAN or within a single machine.